In the early 20th century, motor enthusiasts were demanding more speed, more style, more individuality and more performance. Car designers were happy to oblige, and the sportscar was born and later on the sleek, 2-seater Audi R8. Style is something that marks out the Audi R8 and it’s precisely why the coupe is a head-turner.

The luxury car with German manufacturing has become remote from other cars, with its 5.2- 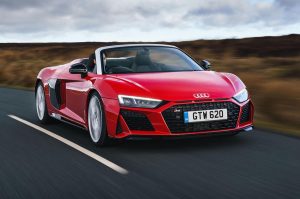 liter V10 engine giving it a top speed of 330 km/h and being able to accelerate from 0 to 100 km/h in 3.2 seconds. All the R8s are V10-powered with a twin-clutch 7-speed auto gearbox. Its sporty design and all-digital gauge display make sportscar lovers agree that the Audi R8 is one of the most sought after supercars available today.

Looks are a Reliable Guide

The Audi R8 has the looks and performance to make it an exceptional supercar. It’s why the car has a number of rivals, trying to be in its league. In true sportscar fashion, the flashy R8 has the Spyder model which allows for the top to come down. The car is also known for its reliability and safety even though the 2-seat design isn’t that practical.

The Audi R8 first made an appearance in 2003 at the International Geneva- as well as the Frankfurt International Motor Show. Convertible models which are known as the Spyder came out in 2008. A new model known as the V10 was added to the mix. In 2018, the R8 received a mid-cycle update to its looks and more performance.